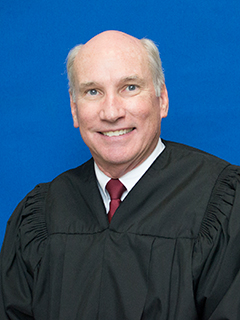 Congratulations to the Hon. Jeffrey Dana Gillen who retained his seat in the recent election. Judge Gillen has served as a Circuit Judge since January 2013. He graduated from Culver Military Academy, earned his BA from Denison University, and his law degree from Syracuse University in New York.

Judge Gillen started his career as in-house counsel for labor and employment relations first with General Foods Corporation then Harder, Silber, and Gillen, in Albany, N.Y. Prior to taking the bench, from 1997 to 2012, he worked with the Florida Department of Children and Families. From 2008 to 2012, he was the Statewide Appeals Director. Judge Gillen currently presides over felony cases in Division W. He has prior experience in Circuit Civil and Family/Probate.

In 2018, the South Palm Beach County Bar Association named him Jurist of the year.